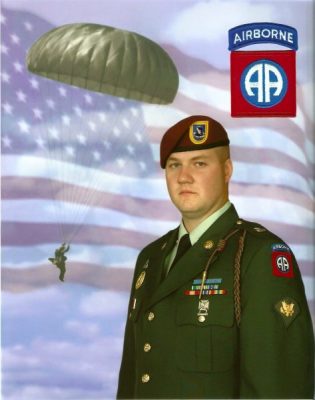 Serving in the military is one of the noblest ways to serve one’s country and its citizens. Those who choose to make a career of it certainly have a strong sense of duty, honor, and selfless service. Ron Dye is one such person. Joining the US Army in March 2001, at the age of 19, he had no idea at that time what an amazing journey he had just embarked upon.

Ron’s first assigned unit was the 3rd US Infantry Regiment, The Old Guard. This prestigious unit is responsible for conducting funerals in Arlington National Cemetery, performing ceremonies in and around the Capital, and the defense of Washington, D.C. Shortly after arriving, the attacks of 9/11 occurred. Ron was activated, along with his unit, to conduct search and recovery operations at the Pentagon in support of Operation Noble Eagle and received a Certificate of Achievement for his efforts. Ron would later earn an Expert Infantryman Badge and a gold German Armed Forces Badge for Military Proficiency. Ron was selected for two Presidential Security Details for then President George W. Bush as well. He also received an Army Achievement Medal for his outstanding performance as a narrator for the Army’s 2003, Spirit of America show where Ron was able to present to crowds of up to 13,000 people.

Speaking to groups of people came easy to him, which would serve him well throughout his career. In 2003, he had his first opportunity as an instructor when he was selected to teach, train, and grade other soldiers participating in the Expert Infantryman Badge test. It would be a few more years before he had the chance again, but it stuck with him.

In September 2005, in the middle of taking a two-year break from the Army, he volunteered to go to New Orleans to help with humanitarian efforts following the devastation of Hurricane Katrina. Ron fed victims displaced by the storm, other aid workers, and members of the military that were mobilized to help as well. His sense of duty to country and compassion for his fellow man have always been defining characteristics.

April 2006 rolled around and Ron found himself enlisting back into the Army once again, this time into Military Intelligence. He became a Human-Intelligence Collector, or more commonly referred to as an interrogator. The focus of this new career path was more cerebral and psychologically oriented. Some skills acquired included effective communication, interviewing and questioning techniques, active listening, and negotiation. Individual abilities such as empathy, perception, and intuition are also incredibly valuable in this field; Ron took to it like a fish to water.

In 2007, Ron was deployed to Iraq where he put these new skills to use and developed many more. Ron, along with his team, were directly responsible for the capture and detainment of numerous insurgents and international terrorists. His efforts were instrumental to the success of his unit’s mission and earned him three Army Commendation Medals.

Between conducting interviews and interrogations, Ron studied to identify barriers of effective communication and how to overcome them. He understood that culture, religion, and geographical location can all affect how we communicate, but the one thing that we need help in truly understanding is someone else’s perception based off those factors. So, Ron went to the Defense Language Institute Foreign Language Center to learn the Arabic language. This military school employs native born speakers, which helps with the immersion process by giving the students access to first-hand knowledge from the instructors’ original countries. Ron was able to dive deep into how the middle eastern cultures, language, and the Islamic religion all combine to create a varying perception of life in general. This helped him to view people, situations, and the world itself from a different perspective.

Ron went on to hold many instructor positions with the time he had left in the military. He trained and instructed courses in basic soldering skills like land navigation and weapons marksmanship. Ron also gave advanced classes in interrogation questioning and techniques, verbal and non-verbal communication, intercultural communication, and information analysis.

After being medically retired from the Army in 2014, Ron would go on to work for the Idaho Department of Corrections. There he continued to learn and study how people communicate, particularly the effects environment and stress have on communication. Ron also continued his track record for being a trainer and instructor by becoming a Field Training Officer for the Department. He helped train and mold new officers to the facility and prepared them to be able to handle situations on their own. Ron also taught courses on Effective Communication and Con-Games, a course about how communication can be weaponized to manipulate others.

Ron is now attending school to further his educational aspirations. He will one day become a counselor, therapist, and/or a motivational speaker. One thing is for certain though, Ron will pursue self-development and growth and he will continue to instruct and teach others to become better versions of themselves.

There are no upcoming events at this time.